If you have used the prior editions of Microsoft SQL or "prequel server", as I have deemed them, then you are familiar with the unparalleled performance that Microsoft SQL has to offer. However, Microsoft has outdone themselves this time by adding some groundbreaking new additions. SQL Server 2016 is the massive infrastructure behind Microsoft’s data strategy, incorporating advancements that transform data into intelligent alacrity. In the new application, SQL 2016 is addressing the most demanding applications utilizing an open-ended data management and business analytics solution with mission critical intelligence as well as insights to view data on multiple devices.

We'll break down the top 8 features that will benefit you the most. Always Encrypted was created to guard data whether at rest or in motion. When using Always Encrypted, SQL Server can perform operations on encrypted data and the encryption key can remain with the application. Encryption and decryption of data happen transparently within the application. Thus, data stored in SQL Server is encrypted which secures it from DBA and administrators, but that also has considerations for ad-hoc queries, reporting and exporting the data. The new stretch database feature enables users to dynamically stretch on-premise database to Azure. This feature allows more frequently accessed or hot data to stay on-premise and less frequently accessed cold data to be migrated to the cloud. Thus enabling the user to make use of the low-cost of Azure store while still have high-performance applications. Using the dynamic duo of SQL Server’s in-memory technologies; combining In-Memory OLTP with the in-memory columnstore for real-time operational analytics. The purpose is to tune the system for optimal transactional performance as well as increase workload concurrency. An exceptional combination of applying analytics to your system’s performance.

Big Data is continuously growing in the realm of strategic importance. In prior releases, Parallel Data Warehouse (PDW) was the only version of SQL Server that came with PolyBase – the technology that linked SQL Server and Hadoop by permitting the user to create and run SQL queries over Hadoop data stores eliminating the requirement to learn HDFS or MapReduce. SQL Server 2016 vows to bring the PolyBase technology mainstream into the primary SQL Server SKUs. Although it will be most likely the Enterprise edition.

JSON (JavaScript Object Notation) is the standardized data transfer format that in prior editions was not supported natively by SQL Server. To execute JSON imports and exports you needed to hand-code complex T-SQL, SQLCLR or JavaScript. SQL Server 2016 promises to simplify those daunting tasks by incorporating JSON support directly into SQL Server much like XML. SQL Server 2016 will natively parse and store JSON as relational data and will support exporting relational data to JSON. 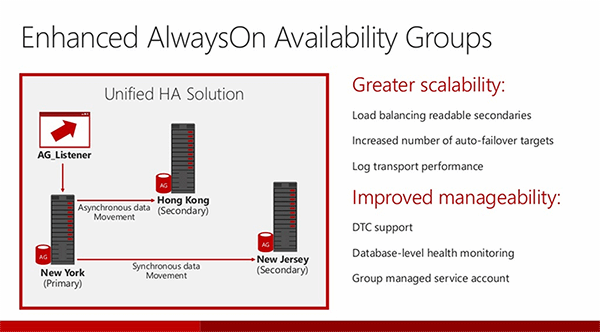 SQL Server 2016 continues to develop high availability and disaster recovery with various enhancements to AlwaysOn. The new SQL Server 2016 will improve AlwaysOn by lending the ability to have up to three synchronous replicas. In addition, DTC (Distributed Transaction Coordinator) support will be included as well as support for round-robin load balancing of the secondaries replicas. Support for automatic failover based on database health will also be included. 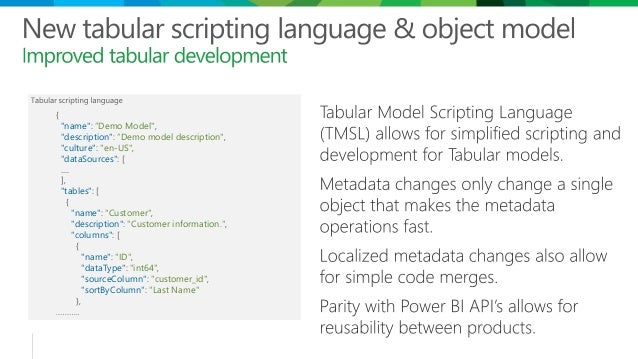 First introduced with SQL Server 2014, In-Memory OLTP will continue to mature in SQL Server 2016. Microsoft will enhance In-Memory OLTP by extending the functionality to more applications while also enhancing concurrency. This means they will be expanding the T-SQL surface area, increasing the total amount of memory supported into the terabyte range as well as supporting a greater number of parallel CPUs.

Applications and data warehouses need to manage and process greater volumes of data than ever before and we know performance is one of the top reasons customers upgrade to new versions of software. This result, in addition to recent benchmarks by software and hardware partners, as well as key applications, show that SQL Server 2016 is the fastest in-memory database on the planet for your applications.